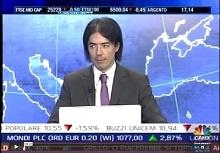 Engineer Gianluca Landi is the founder of BettingExchange.net and of the Betting Exchange Network. Gianluca Landi can boast an important curriculum in the financial field and especially in Betting Exchange: in fact he is among the forerunners in Italy, for what he has done to contribute for the creation, dissemination and especially the future development of this new form of investment and speculation. New tools and options that everyone will use, will be launched in the future months.

Eng. Landi has achieved Degree in Mechanical Engineering at the University of Pisa with a major in Business Administration and he started his career in the financial world in some financial companies such as Millenium sim spa and Capitaltrading spa, where he was responsible for many tasks, including sales manager, development of software and products, training and responsible proprietary trading: having done all these tasks, he could understand the psychological dynamics and methodologies that underlie trading.

In 2007, after he did other experiences in the financial sector, he casually found the betting exchange and with his skills and his abilities he studied and developed his methodologies, which are based on scientific and mathematical evidence and so he became sports trader.
In 2011 he decided to start a business project in order to introduce and develop the Betting Exchange in Italy with the knowledge and the abilities in financial markets before and in the Betting Exchange later. In 2012 he create the website www.BettingExchangeItalia.net which has become the benchmark for professional users, not for using the word "reference", but for being the first site to use some specific terms, to propose different explanatory articles on strategies, benefits, etc and it helped the general public learning about betting exchange; everything is documented and verifiable in the 'Official archive of Internet https://archive.org/ that anyone can watch and consult and instead become aware of who peddles the material for their own not being absolutely true, but enough to mislead those who for the first time approaches in this area.

In this part we can find the highlights of the curriculum regarding betting exchange and sports trading, ignoring that particular in the financial sector and in all other skills acquired over the years ranging from intellectual property protection, programming, seo, law, new technologies , social, marketing, etc.

Author of the Best Seller Book in Amazon Italy "Betting Exchange la rivoluzione del Trading sportivo" where he explains clearly and describes betting exchange, how to do sports trading and he explains his trading methodology. The book contains 282 pages for obvious reasons of the knowledge and secrets of Eng. Landi; in fact many things can be explained only in front of a monitor with real coordinates that move because he has been copied and plagiarized in many ways. Just one sentence in his article, saying it comes at one minute of the game, someone builds an article and It pretends to own this strategy!

Now the same book is available to the English public with the translated version from Italian and his title is "Betting Exchange The Sports Trading Revolution". It can be found on Amazon or on major digital libraries like GooglePlay, iTunes, Kobo, etc.

For the first time in Europe Eng. Landi made sports trading live and in real-time on the Champions League match Roma-Manchester City in the television channel of financial information leader such Class CNBC. During the show Eng. Landi showed everyone what is the sports trading and made trading and real-time scalping with the Betfair exchange, which liquidity in December 2014 was much lower than today. Everything was done with no filter, without being able to agree or already transmitting (Giuseppe Vittorio is known by all to be professional and above all parties) and without being able to choose the game;

He made a profit of over 20% in 45 minutes and visible to everyone in the live video.

Many people speak, criticize and give judgments, but only Gianluca Landi has made trading live in Italian national television gaining! The video is having great success and many people are approaching this new world thanks to it.

Manager of the First National Conference on Betting Exchange

Implementation, geolocation, translation of all Traderlines components , that world of Traderline customers use. The vertical Ladder of Traderline, with all the functionality, was made out with indications of Eng Landi. Thanks to his work, it has been possible in very short time to had in Italy Traderline for the Betfair exchange and people could start making sports trading.

Landi is the developer of the same software having introduced several features and options, and he’s the responsible of the Italian branch: he coordinates the whole Italian Betpractice team. Eng Landi has developed a series of filters and strategies including The Lay of the opposite with Betpractice. He teaches this in his masters of sports trading, with specific courses on how to use Beptractice and how to calculate the Units.

Author of "original" texts on the network

His texts and his strategies in Internet, which are partially visible in the article Trademark betting exchanges, which will be marked with the distinctive trademark avoid confusion with other sites that have been blatantly copied. Be wary of a number of sites that peddle it for their material when it is copied and plagiarized. Just make sure on archive.org to find these braggarts. It was decided to move legal action against all those who copy and plagiarize the material covered by copyright, because they create confusion, by putting texts and professional strategies on a site with others who do not have any kind of statistical and conceptual value .

Betting Exchange trademarks, Betting Exchange Italy and ‘Punta e Banca’ for category 41 of the products pertaining to the company's business and granted to the network are its property.

Gianluca Landi has been a trainer in this field for years and he achieved excellent results. In 2011 He held his first classes in Manchester, where he was invited by a prominent journalist / bettor. Here he could verify the uniqueness of his way of doing things in front of an audience of about 40 English people. His first courses in Italy began on the day of the departure of Betting Exchange in Italy and today the courses continue to move forward with great satisfaction of those who participated. You can find online video about the latest courses and you can read in the section sports trading academy by Gianluca Landi.